Fireworks and a Ferris Wheel on the Fourth of July! 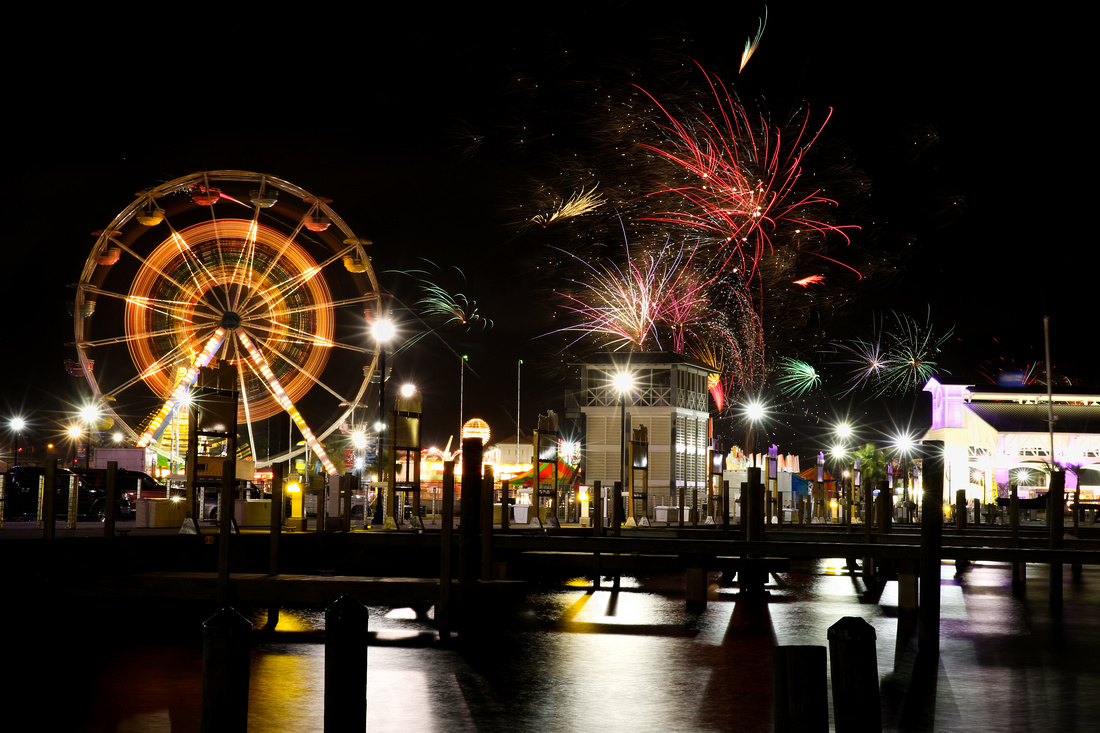 Photographing fireworks can be exciting and unpredictable. With a little experience, good equipment and some thought, you can come back with great photos.

I've photographed a lot of fireworks events over the years, but often, I'm left with images that are lacking content I feel worthy of sharing. As a photojournalist, I strive for a compelling composition, hoping to fill the frame with visual information for the viewer. To accomplish this with fireworks filling the night sky, I look for scenes with existing light sources, so I'm not required to paint the scene with light of my own. The goal is to include elements in the photo that give the viewer a sense of place while also capturing the event.

If you live in an area like the Mississippi Gulf Coast, you may have several fireworks events to choose from when deciding where to shoot. Our family is blessed to live in Gulfport, home to a fabulous, newly rebuilt Gulfport Harbor and Jones Park. As a resident of the city, I feel a sense of responsibility to help document events and life in Gulfport, as well as other communities along the Mississippi Gulf Coast. Fourth of July fireworks are among events that lend themselves to great photos.

If you haven't had a chance to visit Jones Park and the Bert Jones Yacht Basin (aka Gulfport Harbor), I highly recommend that you take time to do so. Enjoy the vast green space with a family picnic, or the cool splash pad with your kids on a hot summer day, charter a fishing trip with your buddies, hop aboard Ship Island Excursions for a day trip to the barrier islands, take in one of the many outdoor movies the City of Gulfport provides for the public or just come down to walk around what has to be the best harbor along the entire Gulf of Mexico.

While walking across the park ahead of the fireworks on the 4th, I was thinking about the photographic image I hoped to capture. There were lots of people in the park and along the nearby beach, as well as boat activity in the harbor and to my surprise, a ferris wheel and amusement area setup for the Mississippi Deep Sea Fishing Rodeo. I was out of town for two weeks prior to July 4th and wasn't able to scout the location ahead of time. When you're out for the best image possible, you want to consider all that's available to you. My original thought was to include an overall, wide photograph that included the many boats in Gulfport Harbor. Since the fireworks are always off the southernmost end of the harbor, I set up along the north side of the boats and faced south.

When shooting fireworks, I use an extremely slow shutter speed of 15 seconds or more to capture multiple bursts and colors, a low ISO of about 125 to compensate for the bright light emitted from the fireworks and a wide open aperture of f22 to ensure everything's in focus, including my foreground subject matter. A tripod is an essential tool for capturing fireworks. It doesn't have to be an expensive tripod, but one that's sturdy and has a little weight to counter possible wind, especially near the water. If you don't have a tripod, take a small bean bag or sand bag, (I've even used a shirt in a pinch) and use the ground or the top of a wall or post to sturdy your camera. This method is not ideal, because you're limited in where you can position your camera, but it can work. If it's extremely windy, try to setup next to something that will block and protect your camera from movement.

As I mentioned previously, my original vision was an image that included boats and more of the harbor, with fireworks in the background. During my test shots before the event started, I thought I was about to get a great image, but after a few frames of the actual fireworks, I just wasn't happy with what I was getting. At some shows, fireworks bursts will be at varying heights, which helps fill the image frame. All of the bursts seemed to be happening at about the same height and were not spread apart. Knowing that fireworks shows are pretty quick, I continued to make a few exposure adjustments and fire off frames, but that ferris wheel kept coming back to my mind.

For my secondary attempt at a nice image, I thought about what was near the ferris wheel. The main show had ended and the public was exiting the park, but I felt there was something still there worth capturing. There was the fabulous Barksdale Pavilion, built with a generous post Hurricane Katrina donation from Jim Barksdale to help rebuild Jones Park, the water of the Mississippi Sound, street lamps and, of course, a seemingly endless array of fireworks explosions on the beach provided by the public. I found a spot that would incorporate as many of these key elements as possible, hoping to capture an image that would represent the beautiful assets that Jones Park and the Bert Jones Yacht Basin (aka Gulfport Harbor) have to offer Gulfport residents, as well as all along the Mississippi Gulf Coast.

The fireworks from residents along the beach had naturally decreased during the main show provided by the City of Gulfport, but soon came back to life afterward. The ferris wheel had even gone dark during the event, but thankfully, the lights came back on, which were key to the vision for the photo I had in mind. With a long night exposure of a ferris wheel, you can get amazing effects, but I also wanted to the viewer to see the buckets for passengers, so I had to time the image where there was a combination of the stationary ferris wheel allowing passengers to get on and off, as well as the ferris wheel turning. To the right side of the photograph, you see the Barksdale Pavilion, the water of the harbor in the foreground and street lamps mixed in. The star effect from the street lamps comes not from a filter or post processing, but rather from the f22 aperture, which is an extremely small opening.

I hope you like the photograph and find the description of the process helpful if you're looking to photograph fireworks yourself. Always take the time to consider an alternate perspective for what you're photographing. You just might be surprised by what you find. Next year, there's a good chance I'll be back, looking for a different angle and experience; and, of course, hoping for an even better photograph!