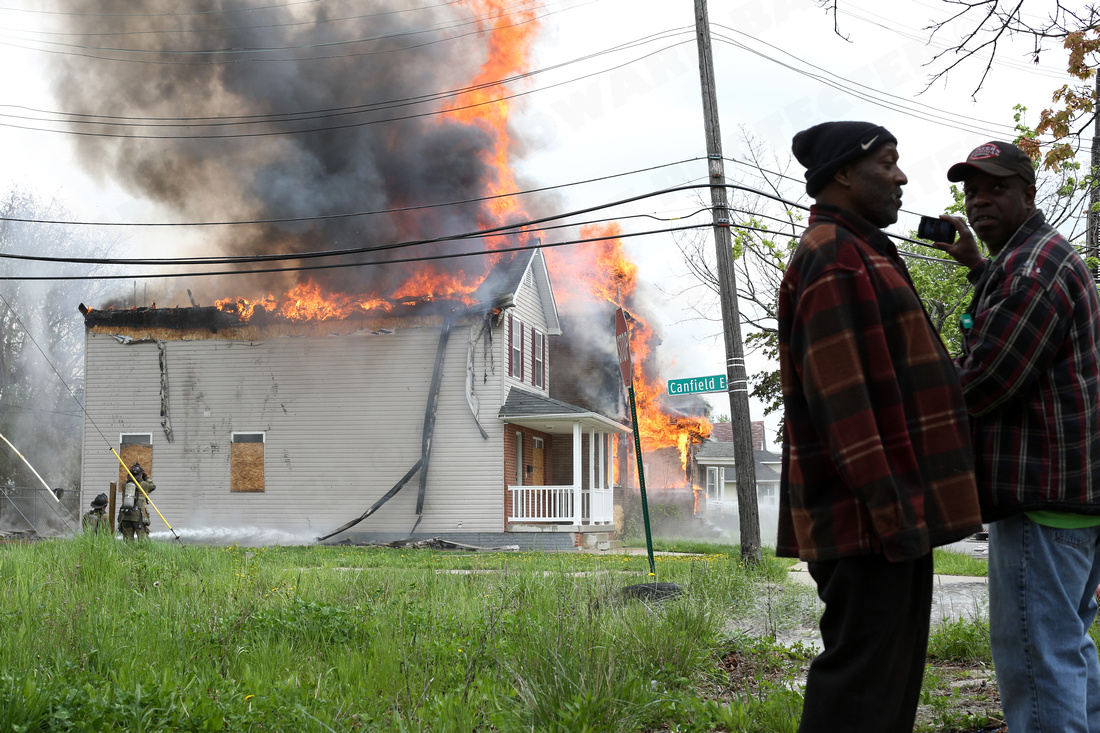 Residents watch as firefighters battle a structure fire that destroyed two vacant houses in their Detroit neighborhood. Intentional fires in vacant homes is a huge problem in the city. ©2013 James Edward Bates 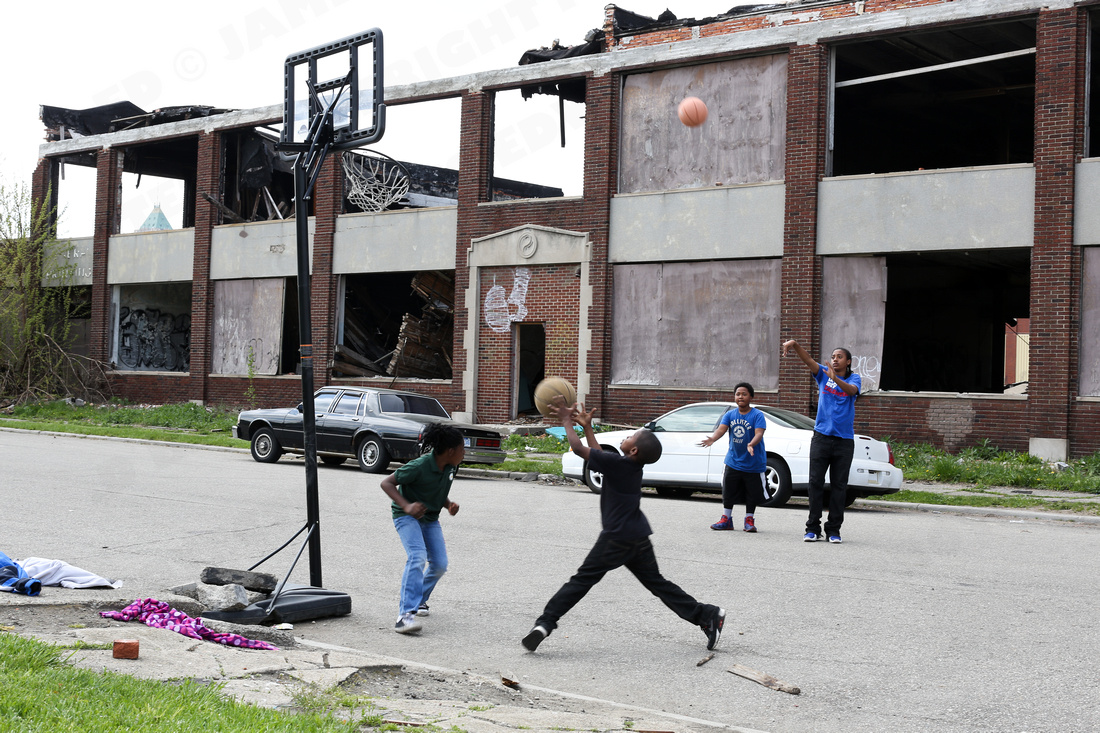 Detroit youth play a game of hoops near the site of the abandoned Fischer automotive plant (not the building in the background) on May 11, 2013. ©2013 James Edward Bates

The City of Detroit, Michigan, filed for Chapter 9 bankruptcy protection today, seeking to shield itself from creditors, as reported by Detroit Free Press on Thursday. The Motor City is estimated to have debts between $18 billion and $20 billion, making it the largest city to file bankruptcy in American history.

Feeling bankruptcy was inevitable for Detroit, I spent some time in the city in May of this year to try to get a feel for the challenges facing Detroit and her residents. What I found were a lot of blighted industrial and residential areas. There are lots of empty buildings, many of them relics from the automotive industry in deplorable, unsecure conditions. Some are clearly hazardous and easily accessible for children and youth to explore or vandalize.

During my brief time in Detroit, I found kids doing what kids do best, playing with their friends. I found residents taking care of their yards and spending time with their families. I also found the previously mentioned abandoned buildings and countless abandoned residential properties. Many of them had been burned out or completely burned down. In fact, while I was photographing the long abandoned Packard Automotive plant, a fire engine passed, sirens blaring, as firefighters responded to a call. After a few minutes, my curiosity got the best of me and I began driving in the direction the fire truck had gone. It didn't take long for me to discover a huge plume of smoke in the distant sky. Within about five minutes, I arrived at a structure fire of two abandoned houses situated side-by-side.

I captured a few frames with my camera and began speaking with residents who confirmed the reports I had already seen; that there had been a rash of abandoned properties torched. It really seemed common place to the folks I spoke with. Even the firefighters had a relaxed approach to the situation. I mean, they were doing their jobs, but you could tell this happened often.

As I began walking to my car, an elderly lady called to me from behind the screen door of her front porch. I walked over and introduced myself, learned that she was born in Detroit, but surprised to hear that her parents were born in Mississippi, where I am from and live. Having a connection, she began to speak freely of her disgust for the condition of her neighborhood and the city where she had lived her entire life. She was almost in tears. She didn't want to be photographed, but she wanted to talk.

As flames continued to billow out of the two houses down the street, she emotionally explained how she had just last year purchased the home she had rented for six years prior to that. She longed for a time where Detroit's problems would become a thing of the past and she and her fellow residents could move forward. She explained that she was sick and tired of people burning down her city and how the neighborhood deserved better; how her city deserved better. She seemed rather exhausted emotionally, but she still had fight within her.

Detroit is in a bad way and it's a condition that's been in the making for many decades. The current state of the Motor City didn't happen overnight. It's not a result of the most recent recession, though that surely didn't help matters. It's not the result of a single administration. It's a complex issue that I honestly don't know enough about to discuss, but I know one thing. Detroit needs a lot of help.

If the city is armed with residents like the lady I described above, then it has a fighting chance. There was talk by residents speculating that some officials were hoping for a bailout by the federal government. If it happens, throwing free money at the city may be a temporary fix, but it won't last. Detroit needs long-term solutions, a population that believes in her recovery, investors who believe in her future and a lot more. If Detroit has nothing else going for it, it has residents with deep-rooted love for their city. This is America and because of that, I personally have hope that this city can be turned around. It's going to take some time, perhaps 20 years or more before we could see a noticeable difference, but I have faith that the city will be back.

I believe in buying American goods as often as I can find the items I need. I'll be honest and say that I've owned a lot of foreign vehicles as an adult. My father had a Toyota with 350,000 miles and my last Honda had 435,000 miles. That's hard to beat. About the time of my visit to Detroit, I made the decision to purchase a truck. It came down to the Toyota Tundra and the Ford F-150 4x4 crew cab. I'm proud to say that I went with the Ford. With this purchase, I would like to think I'm doing a little something to help make America and Detroit strong again. I'm also happy that Ford didn't take the government buyout offered to the big 3 auto makers. A friend owns the local Ford dealership, which made my decision an easy one.

During my time in Michigan, I spent a morning at the amazing Henry Ford Museum in Dearborn, a suburb of Detroit. If you've never been, take the time to check it out. It's worthy of a road trip with the family and a great place to teach your kids, and yourself, a whole lot about how America was built. Among the seemingly endless items of historical importance are the limo President Kennedy was assassinated in and the theater chair President Lincoln was sitting in when assassinated. Adjacent to The Henry Ford is Greenfield Village, a community built by Henry Ford to preserve homes, buildings and autos from the turn of the century. You can see Thomas Edison's laboratory and take a ride in a Model T or horse-drawn carriage.

In about a year, I plan to return to Detroit, to see how the city's coming along and you can bet I'll stop by to see how my Mississippi connection is making it.

For more photos from my recent visit to Detroit: http://www.jamesedwardbates.com/detroit

Kelley Salvetti(non-registered)
Although Henry Ford did not invent the automobile, he developed and manufactured the first automobile that many middle class Americans could afford to buy and revolutionized the way the world travels. It is heartbreaking to see what that industry has become in America today.

I also try to purchase American products, but have owned several foreign cars, my Toyota was hard to beat. I recently purchased my first Ford product in a long time. It is a Ford Fiesta and I couldn't be happier with it. We recently traded that in to upgrade to a Ford Focus for my son. I respect the Ford Motor Company for not taking a government handout and rolling up their sleeves, applying American ingenuity and spirit to their products and getting the job done. It is the spirit and values that made America what is once was and can be again.
No comments posted.
Loading...
Subscribe
RSS
Recent Posts
Wedding: An Ole Miss gal and a Mississippi State guy... Wedding: Brandon & Roslyn New Baby: Hudson Reverend Billy Graham New York Last Crusade Boroughf Family Outing Great Socks for the Groom & the Guys! Lights to go out on USM darkroom Honoring Hattiesburg's Fallen Historic Grass Lawn is a great Gulfport asset Lights to go out on USM darkroom
Archive
January February March April May June July August September October November December
© James Edward Bates
User Agreement
Cancel
Continue