Lights to go out on USM darkroom

It's a sad day as digital technology replaces the age old art of darkroom development at USM's Southern Miss School of Mass Communication and Journalism in Hattiesburg, Mississippi​. While I appreciate many of the advancements the digital age has brought, such as the ability to share an image with the world in real time, a part of me dearly misses the peace and tranquility of the darkroom.

During my days as a photography student under the direction of Professor Ed Wheeler at the University of Southern Mississippi, the darkroom was a place of refuge from the burdens of academic study, a necessary evil to obtain a college degree. All I wanted to do was make photographs. I spent many long nights in the basement of Southern Hall, eagerly processing the film I couldn't afford, but had somehow managed to find a way to purchase. I ate a lot of cheap pasta, so I could afford to buy bulk film. I'd roll it myself before taking it out into the world to find photographs that told a story.

Few photography experiences match the sense of accomplishment that came from the days of film, as you rushed back to the darkroom from a shoot, developed rolls of film and watched the magical process as light streaming through your enlarger and a chemical bath process brought negatives to life in the form of a print.

I still own a darkroom enlarger. It's not in a functioning darkroom, but it's there. Waiting. Available. Ironically, it was given to me by a friend when a newspaper darkroom was shuttered. It's too bad the darkroom at USM can't be supported as a form of art, an important means of expression to many. Some photographers are reinventing themselves through the early photography processes like the tin type, giving new appreciation to a long lost art. It's often difficult for universities to support the arts when times are tough financially.

All of this makes me think of the Model T I once owned. I loved that truck, a Model TT, one ton Ford truck, specifically. A 1923 model constructed of a solid wood cab and bed, it was the kind of vehicle you had to use a hand crank on the front of the engine to start before being modified with an electric push button start. The truck was antiquated. It had no doors and a single windshield wiper you had to operate by hand - while driving. Built the same year my grandfather James Marion Bates was born, the truck would go no faster than 17 mph downhill and the overwhelming gas fumes drifting into the cab made it difficult for passengers to have a pleasant experience. The gas throttle was on the steering wheel and reverse was the far left of three pedals. As old and difficult as it was to drive, there was something I really loved about it. It was unique. It was a challenge. No one else around me had one. Typically, it was just me and the truck, cruisin' down the street. It was a genuine head turner.

I think I'll dust off that enlarger soon, and make some photographic art just for the sake of keeping it going. When I'm done, I'll have to go track down that Model TT Ford and see if the fella I sold it to might take me for a spin down memory lane. 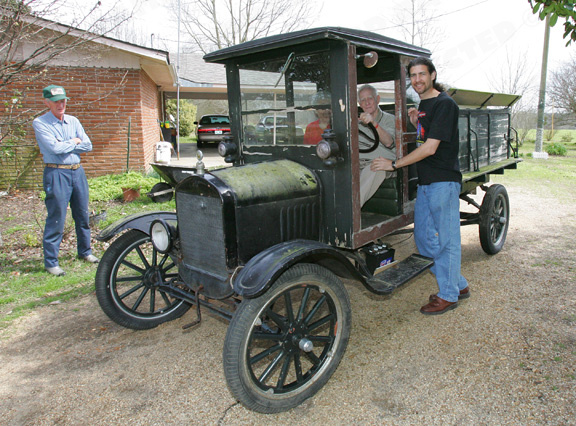 James Marion Bates with 1923 Model TT FordFrom left, my great uncle Jerry Harvey, grandparents Kathleen and James Marion Bates (seated) and me with my 1923 Model TT Ford truck shortly after purchasing it. My grandfather was born the same year the truck was built and he seemed to be the only one who knew how to drive it despite suffering from dementia. That truck brought a smile to his face that day, making it well worth the experience.

From left, my great uncle Jerry Harvey, grandparents Kathleen and James Marion Bates (seated) and me with my 1923 Model TT Ford truck shortly after purchasing it. My grandfather was born the same year the truck was built and he seemed to be the only one who knew how to drive it despite suffering from dementia. That truck brought a smile to his face that day, making it well worth the experience.